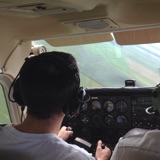 Singapore Airlines' Suites Class is the most aspirational airline product available. With an onboard double bed, bottomless flutes of Krug, and the most attentive service of any airline, what's not to like?

The trip started with a leisurely stroll to the airport. It was -20C, but we were in Tallinn, one of our favourite European cities. Apart from its majestic old town and forty-proof glögi, its international airport is only 4km away, so it's a reasonable walk.

Singapore doesn’t fly from Tallinn, so we high-tailed it to FRA. We took another wintery walk to our Meininger Hotel, then hit the pavement the next morning to collect these puppies: 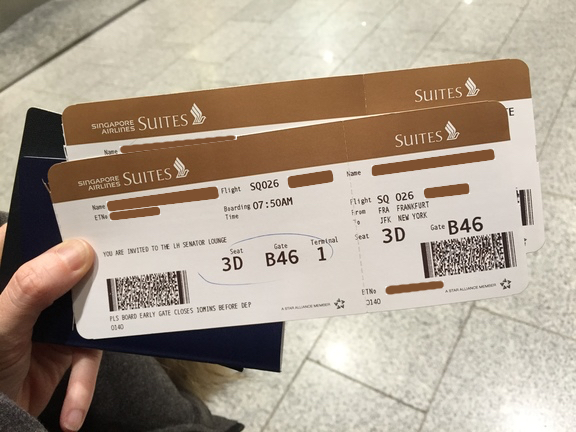 A sweet pair of suite tickets!

The walk to Terminal 1 isn't exactly scenic, but it got blood flowing before the onslaught of good food, great wine, new movies and relaxation.

We approached the Singapore Airlines desk:

It happens all the time; must be our backpacks and youthful looks :) It was well intentioned, so no harm. We'd soon board Suites Class to find everyone dressed casually; most of the guys had unkempt beards too.

On our way to security, we noticed FRA's super-geeky flap board. This electro-mechanical masterpiece is immediately hypnotic to watch. If you squint, you can see our flight eighth row from the top: SQ 026 to JFK. 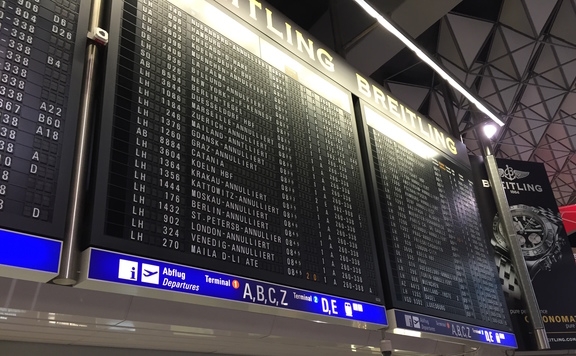 The Frankfurt Airport electro-mechanical flap board

Boarding was only an hour away, so we cut loose for the Lufthansa Senator Lounge.

The lounge was unassuming. The door attendant waved us through and we landed next to three children playing frisbee (ja, inside the lounge). Other patrons were nonplussed and the kids were a hoot; a refreshing change from the usual stuffy suits.

We ordered a couple of espressos, checked our email, and searched for ways to make our connection in NYC. Although we were landing at JFK, we had an onward flight to YUL from LGA only an hour later. Could we make it in time? Easy!

The lounge staff didn't collect us, so we gathered our bags and hit the jet bridge behind the masses. As we stepped onto the A380, POP!!! The first bottle of Dom flipped it's lid and the banality of pre-boarding was behind us.

Wendy and Karen, our stewardesses, introduced themselves, helped us get settled, and proffered tall flutes of 2004 Dom Pérignon. We'd later move onto Krug, but who were we kidding; we'd neither recognize the difference now, nor six glasses later.

The Singapore Suites Class seat is super-duper spacious. There was ample room to hang clothes, stow shoes, store bags, and organize tidbits. It was comfortable too; the sort of comfort that makes you feel at home, like this: 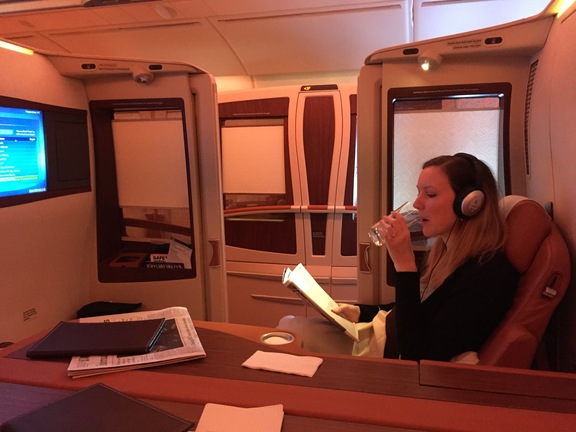 Lauren hydrating while reading The Economist

Lauren caused a little stir by requesting a copy of The Economist. Wendy said the plane's single copy had been given to someone in business. Lauren assured Wendy she could wait, but Wendy insisted. From all reports (actually, no reports at all), Wendy put the passenger in a headlock while Karen snatched the half-read periodical away.

We received our menus, drank more champagne (it was still early morning), browsed the seemingly endless list of movies, and settled in for the long-haul. I started by watching Tom Hardy and James Gandolfini in The Drop, then spent time reading my Kindle.

Here was our mistake: we took a flight with the light meal service only. We didn't have much choice given our timeline, but it's something to consider. 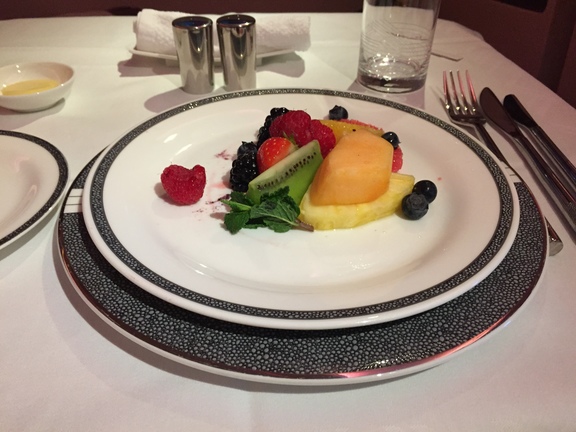 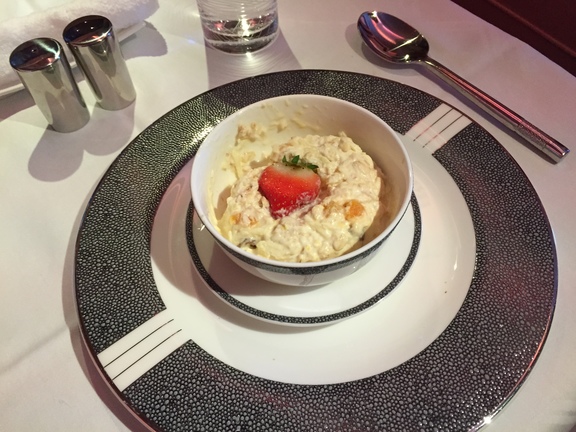 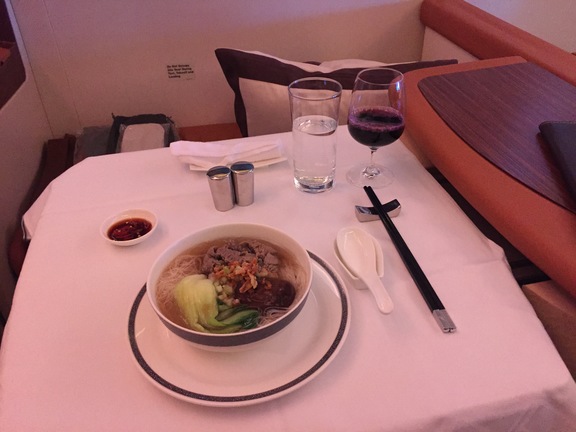 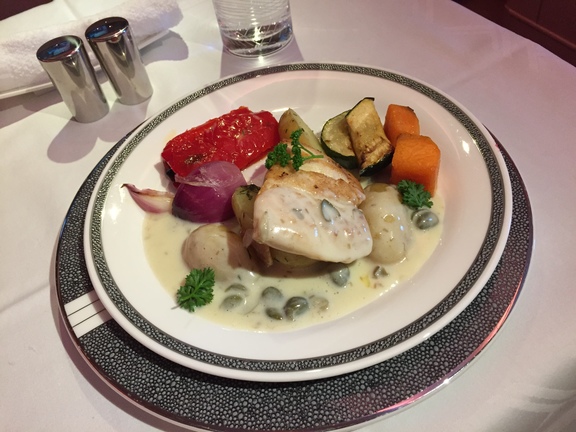 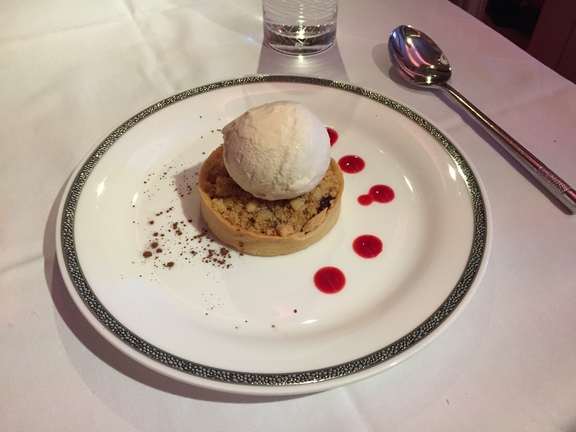 Lauren had the snapper, I had the soup. My soup was the best meal of the trip. Hot, spicy, and scrumptious. The rest was más o menos, which was a shame. But the Krug kept flowing and the movie selection was great, so we were happy chappies.

While we changed into our complementary pyjamas, the crew converted our seats into a double bed. As you can see below, there's a spacer between the seats and the belts are still exposed. Electronics are relocated too, since the easy-access sockets disappear.

I know what you're thinking, but no, Singapore Suites aren't ideal for getting busy. They may be miles high, but the walls are only neck high. The stewardesses are tall too, peek-a-boo! It's possible, but only once it gets dark and the service becomes less attentive. 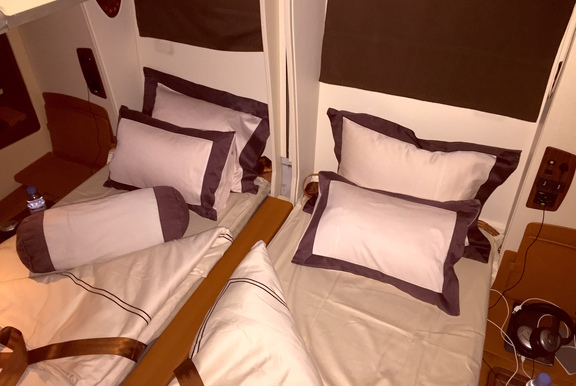 There's no doubt, this is one of the best sleeps in the sky. The chair goes fully flat, the mattress covers the bumps, the bedding is comfortable, and Krug is a perfect sedative.

But that raises the question: do you want a full sleep on an 8-hour first-class flight? It's possible to sleep the entire experience away, so we agreed to be woken for the next meal.

We awoke to a hot, dry cabin, so we both toddled off with our first-class amenity kits to wash, change, and return to watch our suites being transformed into seats. 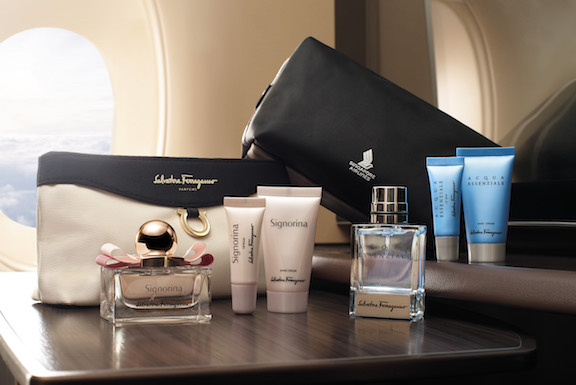 The Salvatore Ferragamo amenity kits weren't just for show. Razor, toothbrush, toothpaste, all the good stuff. Plus less functional items, such as a large bottle of eau de toilette. We were encouraged to keep the Givenchy pyjamas too, but I like to keep my pack light.

Once settled, it was meal time, woohoo!

I wasn't sure of the time because we were over the Atlantic Ocean. In theory, we'd just woken up, so I guess it was breakfast. Not the most common time for red wine, but hey, convention is no match for a 2007 Château Cos d'Estournel.

Our entrée soon followed, a rubbery spring roll with blue cheese salad, then our main, a beef fillet with a generous (capital G) serving of seared foie gras. 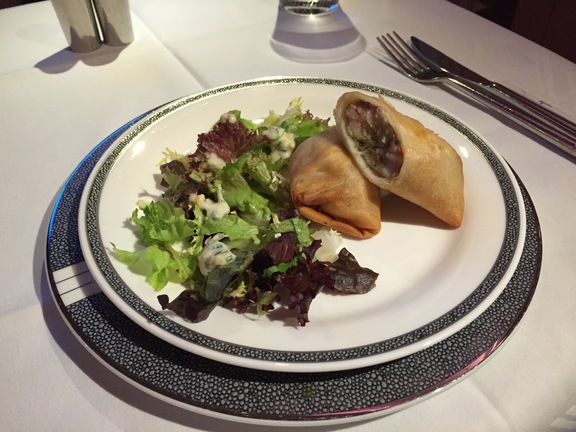 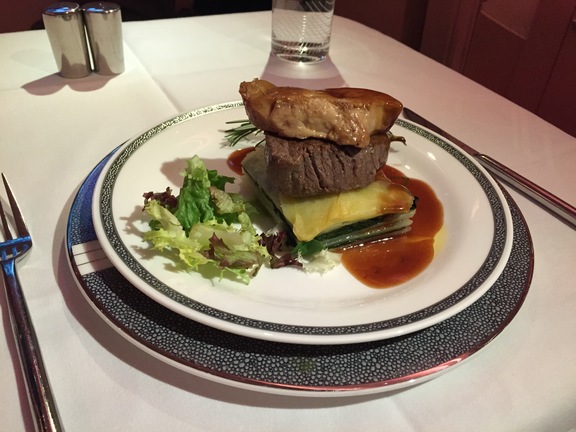 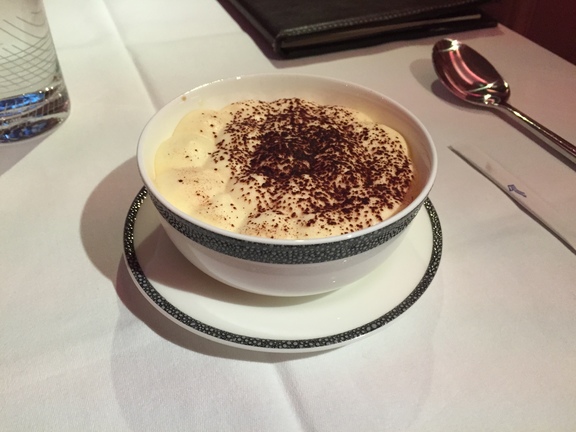 The beef was an unknown cut and pretty tough. It reiterated that not all Singapore Suites flights are the same. For the best experience, you not only need a flight with full meal service, but it helps to depart a flagship SQ airport, ideally SIN or JFK.

It was a fun flight, but way too short. If you rarely splurge on first class, I suggest taking a longer flight, ideally an extended route, such as SIN-NRT-LAX.

The seat, entertainment and media selection were excellent, an easy 5/5. The Bose noise-cancelling headphones did a great job of masking the four Rolls Royce jets too.

The catering wasn't the best, but we chose a bad route, so I gave it a 4/5. Just remember, when you're searching for a Suites flight, ask yourself the following:

The service is a controversial topic. I found it a little too attentive. I refrained from sipping my wine during a movie because I knew five questions would ensue. Less attentive airlines would just pour. So it was a stretch for me to give the service a 4/5.

Overall, Singapore Suites Class is an excellent product. It's made a lot better by choosing the right route beforehand, so keep reading as we investigate the aircraft and routes.

Suites Class is only available on Singapore Airlines' A380s. It operates a standard non-suite first-class cabin on other wide-bodied aircraft, such as the B777. In the picture below you can see the segregated Suites Class on the lower deck just behind the cockpit. 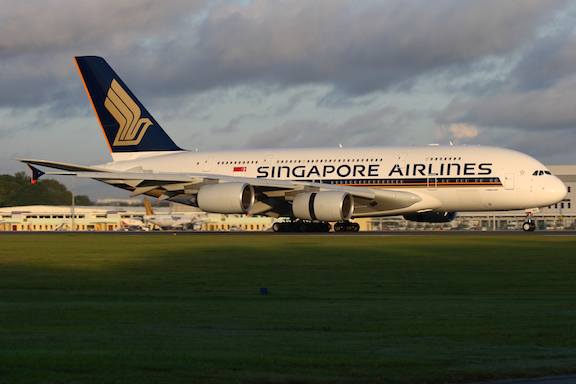 A Singapore A380 (with Suites Class) taxiing.

In all Singapore A380s, there are 12 suites at the front of the lower deck. Seats 2C and 2D have space for bassinets, while our favourites are the rear seats for privacy reasons. If you're flying alone, choose 4A or 4F, or as a couple, choose 3C and 3D.

Most importantly, the middle adjacent seats convert into double beds for couples wishing to sleep together. Although there's a padded 15cm-wide spacer between the two single mattresses (under the duvet), it's still the ultimate honeymoon configuration. 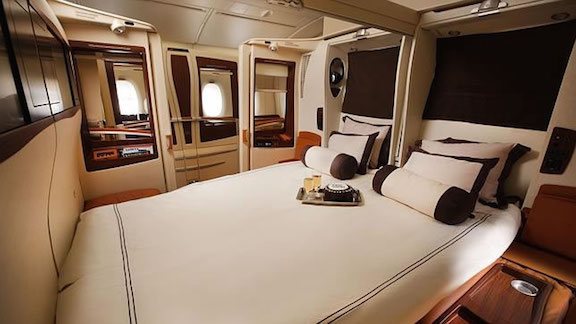 One Mile at a Time recently reported a minor update to Singapore's suites. The newer version is recognizable by dark brown leather trim, opposed to the original caramel trim.

Most Singapore Suites flights involve Singapore's Changi Airport, but there are a few interesting fifth freedom flights (i.e. flights between foreign countries) that can extend your suite time. You can drag and zoom the map below to explore further.

To get the full Singapore Suites experience, we suggest taking a longer flight. The table below shows all non-stop routes, but highlights those over 12 hours with full meal service.

Choose a route with full meal service or at least Book the Cook beforehand. You'd be surprised how easy it is to book a route with only light catering, which means no caviar!

Singapore's extended routes are the most interesting to connoisseurs. Why fly FRA-SIN when you can hitch a ride to New York and spend 20 hours in the air with JFK-FRA-SIN.

The table below shows Singapore's four extended routes that include stops in either NRT or FRA. Take note, the longest option doesn't include full meal service on either leg.

Looking at all the data, my favourite route is easily the SIN-NRT-LAX and JFK-FRA-SIN. Both have double full meal service, plus the depart flagship airports. The Book the Cook menus are best from SIN, but JFK is a close second.

At Flightfox, we help thousands of customers travel better for less every year. We do this with our marketplace of genuine travel experts. These experts have an extraordinarily deep understanding of flights, hotels and loyalty programs.

Todd hasn't just flown Singapore First Class Suites, but also helped many customers do the same. If you'd also like to fly the best route in the newest cabin for the lowest price, don't leave it to chance, work with Todd.

comments powered by Disqus
We just refueled the jet (updated the system). Please click here to refresh and continue.