Thai Airways First Class is one of the most accessible first-class products with excellent award availability through Star Alliance partners, especially out of Australia and Asia, which is why we were excited to view it as a priority.

Thai Airways only flies out of Europe with their A380's from two airports, Paris Charles de Gaulle (CDG) and Frankfurt am Main (FRA). On a Monday in January 2015, I was booked on the 1.30pm flight from Paris. While I could have taken an early a.m. flight with either SAS or Air France, Paris is a city you can’t visit too often, so I chose to fly down from Copenhagen the day before.

Paris CDG airport, and especially the uniquely designed Terminal 1 where most Star Alliance flights departs from, is far from my favorite airport. But I quickly found the check-in area for Thai Airways. The business and first class check-in area was guarded by a lady, and since I didn't have a print-out of my itinerary, I almost had to swear that I was actually booked in first class to be allowed through.

To my great disappointment (it's a flight geek thing), the first class agent was busy checking in one of my fellow first class passengers, so I hesitantly walked to the available business class agent waving me over. After handing over my passport and placing my suitcase on the scale, it only took a few seconds before I had my first class boarding pass in my hand.

You are entitled to check 50kg (110lbs) when flying first class with Thai Airways, plus an extra 20kg (44lbs) with Star Alliance Gold status.

Star Alliance have a common lounge in the non-Schengen area of CDG Terminal 1, with a special area for first class passengers. They do serve a decent champagne (Heidseick's Monopole), but apart from that, there is not much of a first class feeling at the lounge. 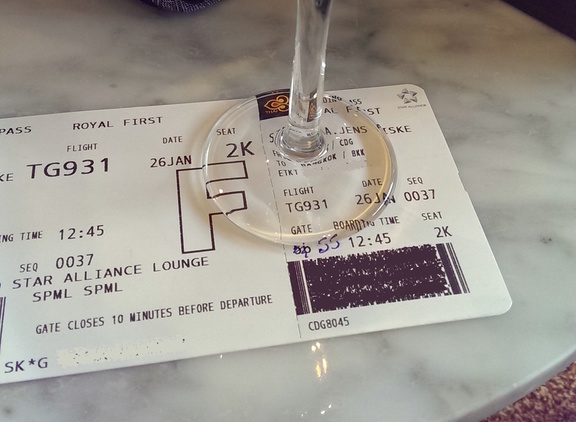 The Airbus A380 is not a small bird, and when 500 passengers want to board at the same time, chaos ensues. I was pleasantly surprised when I found out that the unwashed masses of economy class :) would board from gates 56 and 57, while first and business class passengers would use gate 55.

I was the first onboard of all first class passengers, and I was greeted by the female cabin chef, and then later by the two cabin attendants serving the front cabin of the penthouse floor of the A380. The cabin chef proactively offered me a ”tour”, as well offered to take pictures of me in the cabin. 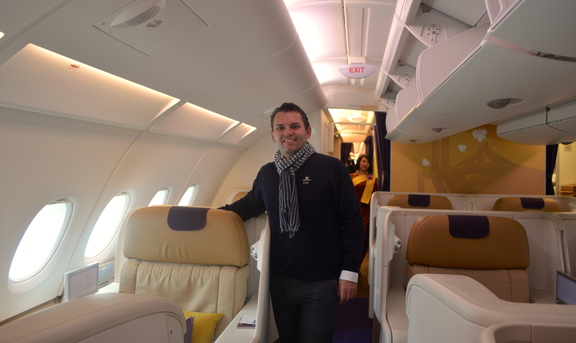 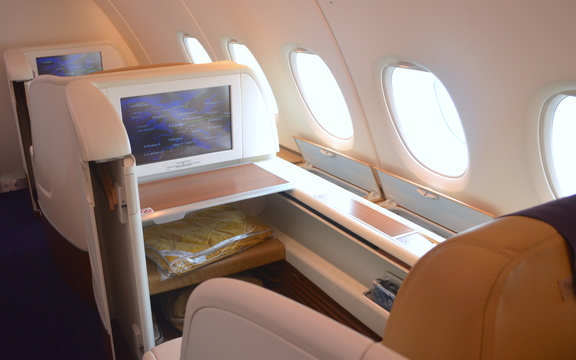 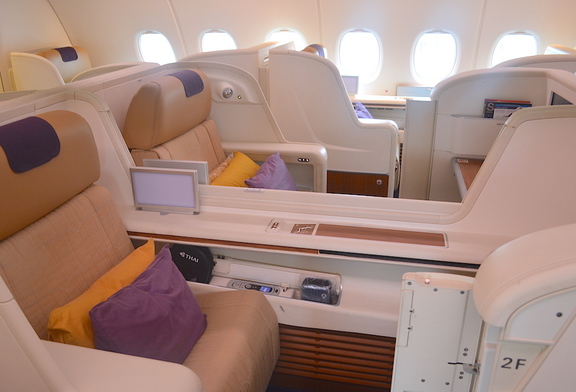 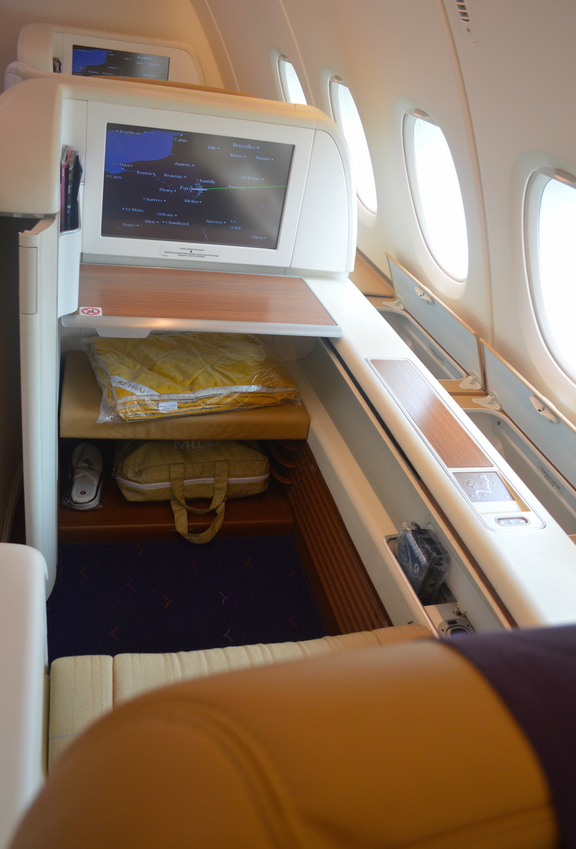 Shortly after, I was offered a glass of Dom Perignon 2004, which of course, I could not decline. I was also offered a hot towel, as well as a very wide selection of newspapers and magazines. A Rimowa amenity kit with products from L'Occitane was also handed to me, together with a set of Thai first class pyjamas. 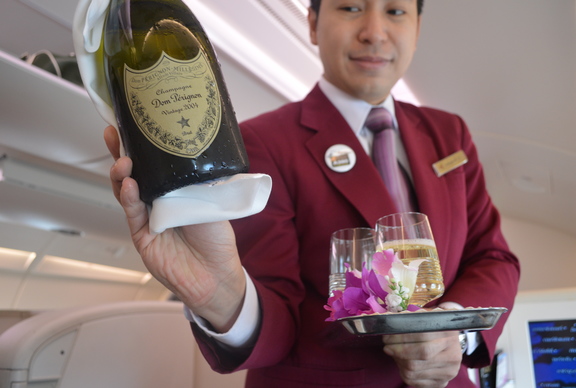 The captain had reported 10 hours 30 minutes' flight time with some turbulence. It took 45 minutes after takeoff before the male cabin attendant came to my seat with another glass of Dom, together with some assorted nuts, served unheated to my surprise. 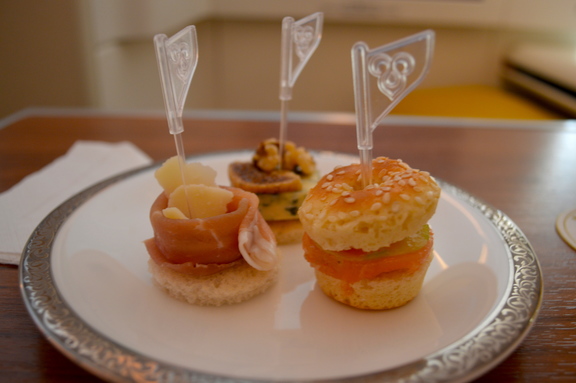 Three canapés were served. One with blue cheese, fig and walnut, another with parma ham and parmesan cheese, and the last one with salmon and cream cheese. While that might sound yummy to some, it doesn't to a cheese-hater like me. I did eat the lower half of the salmon "bagel" though. I sent back the leftovers, and went to the lavatory to change into my new pyjamas, or as I call it, my "Thai Royal First cotton track suit".

I had great expectations for the next serving – the caviar. It was served with the usual garniture; egg white, egg yolk, chopped onions, sour cream and… wait… “No blinis?” I asked. ”No, only thin toasts today, Sir”. Disappointment. But at last we came to the "real deal" — the sturgeon eggs. 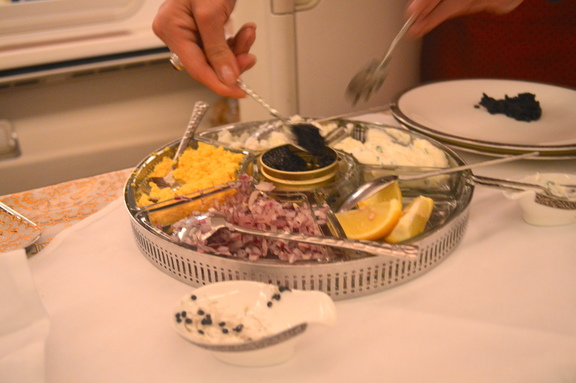 She poured me a spoonful from her silverware, which I would warrant the death penalty in certain countries; we caviar connoisseurs know it should be served by a spoon of mother-of-pearl, cow horn, or in worst case, wood. 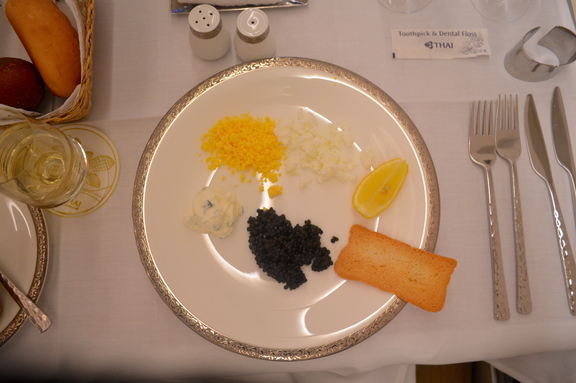 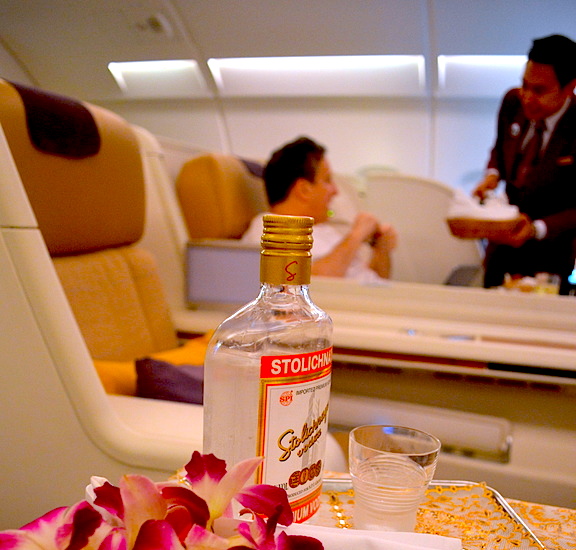 Stunned, and also a bit tipsy after three glasses of Heidsieck in the lounge and on my third glass of Dom in the air, I forgot to ask for Stoli to accompany my caviar. But the cabin attendant also forget to offer it. It was on the trolley and the passengers in row 1 were offered it. Stoli has been my favorite vodka brand since I read American Psycho, where it is the preferred brand of the main character and his friends. Anyway, it wasn't that important. Champagne, and especially Dom, is legit with caviar.

The First Course was listed as,

but the crew claimed the scallop to be crab. I wasn't sure, but it was by far the best part of those three items. The terrine was so chewy, that I left most of it on the plate, and only forked out the foie gras. The carrot was raw, which I found odd. 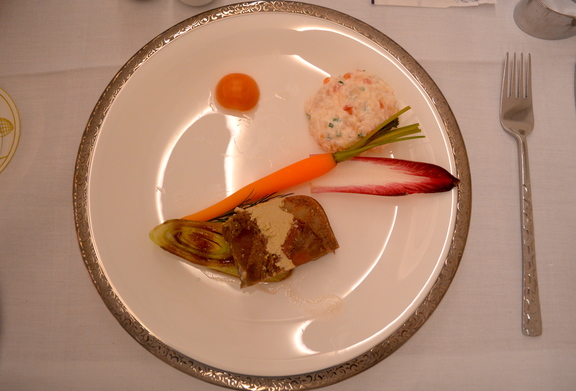 For this course, I switched to red wine, and I didn't regret choosing the Chateau Batailley 2007. Maybe not the best year (and the '07 should really be drunk by now), but it was one of the best red wines I have ever had in the air.

While they had a choice of four main courses onboard, I pre-ordered my main course in advance. It honestly took me hours to choose between the beef tournedos and the swordfish. Since it's easier to screw up fish, combined with the possibility I would have had to drink white wine after red, made me go for the tournedos. 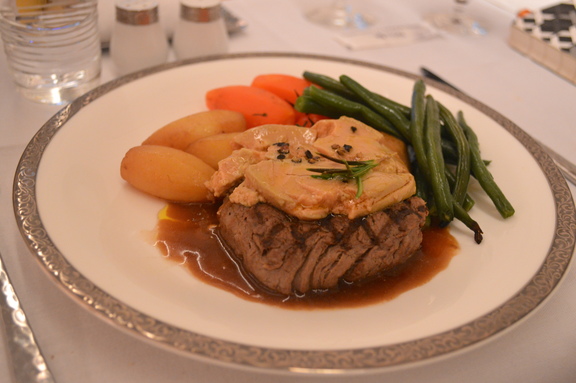 I was asked how I wanted my steak, and I asked for it to be medium. The beef was served with a delicious slice of foie gras on top and was served with pommes anglaise, carrots (shaped as the potatoes), and haricot verts. While the beef was juicy and tender, I seriously doubt it was filet mignon, as tournedos should be. The main course was still by far the best of dish served on my flight. I also ran out of red wine several times, and the longest it took them to fetch more, was 17 seconds.

Before I had finished the steak, they had rolled out the dessert trolley in the left aisle. When it was my turn, I declined the cheese (as you may expect), but welcomed the fruits and a glass of port. The port was Cockburn's Special Reserve, which didn't impress me at first, but after some minutes in the glass, came back as a positive surprise. The fruit was incredibly flavorful, especially considering it was January.

I usually have problems sleeping onboard airplanes, even with a flat bed. Alcohol helps, but not always. But... the TG bed was so comfortable that I fell asleep in minutes. I wasn't tucked in, as I have heard that they do on Japanese airlines, but I didn't have to be. 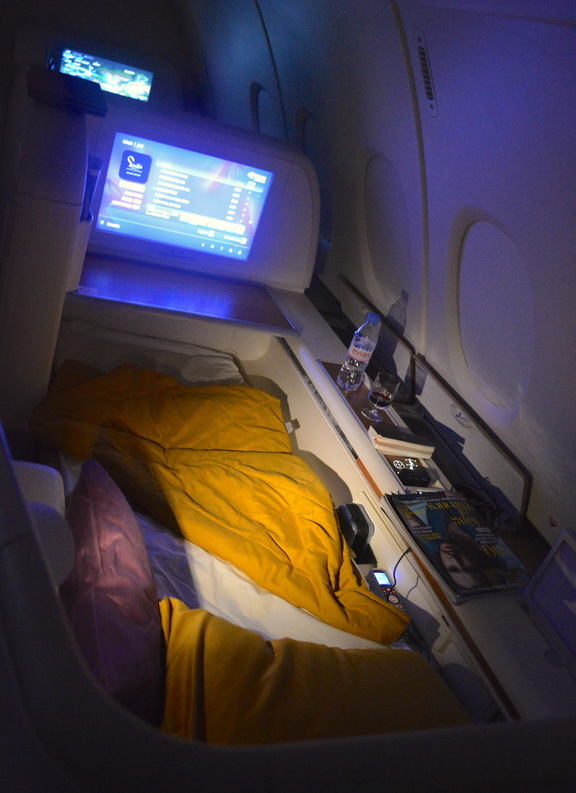 Sleeping on Thai Airways A380 in First Class

I had asked the crew not to wake me up for breakfast, but just an hour before landing. I comfortably woke up by myself and I was attended to immediately. I asked for coffee, some bread and fruits, and some orange juice. Coffee was excellent, the roll and croissant were okay, the selection of fruits was spartan, and the juice was not freshly squeezed, which I think is fair to expect in first class. 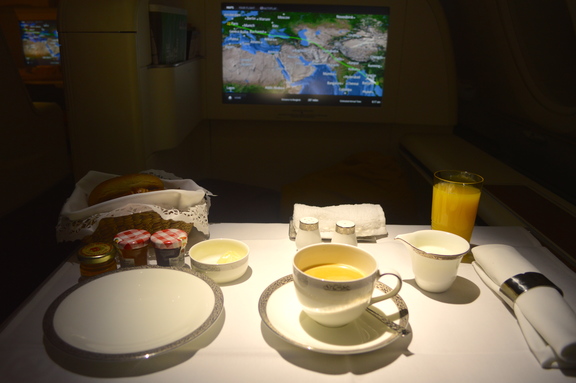 Breakfast on Thai Airways A380 in First Class

Just before we landed, the two cabin attendants came over to my seat, kneeled and thanked me for flying Thai Airways First Class, and hoped that I would have Thai Airways as my first choice in the future.

At arrival, a smiling lady waited for me and two other passengers, holding up a sign with our names on it. We were bussed to the terminal, escorted to the Premium Lane of immigration, and my suitcase was literally first on the baggage carousel. Onward to the city of Bangkok!

Overall, I really enjoyed the flight, but if you want to be really spoilt, it would be best to fly Thai out of their hub to get the full experience. The check-in and lounge experience were underwhelming. In Bangkok, First Class passengers have access to the Royal Orchid Spa with free massage, as well as an a la carte menu. This is not the case in Paris and other outstations.

In air, the service is impeccable, and while the wines were very good, I wasn't overly impressed with the food offerings. The In-flight Entertainment system was good, with a nice big screen, but content was a little disappointing.

So the bottom line is, I would take a Thai First Class flight any day, without hesitating... except if I had a choice of other five-star first-class cabins.

Thai operates first-class on its A380s, A340s, 777s and 747s. Importantly, there are newer and older versions of the first-class product. All A380s have the new configuration, whereas all A340s and 777s have the old configuration. The trick is identifying the 747s with the newer product. 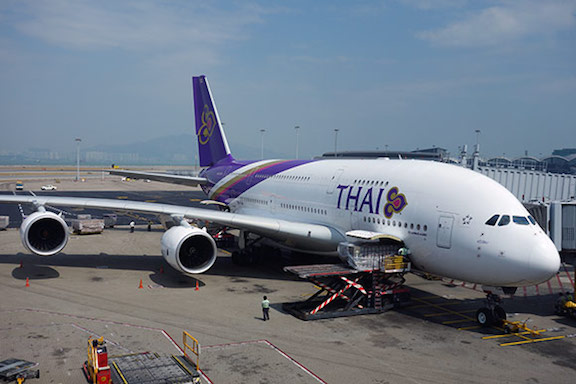 If you must book first-class on a Thai 747, for example from Sydney, you can choose the new product by looking at the seat configurations:

Recommended A380s and 747s with the newer product

Although some 747s have the new product, the A380 is certainly the nicer experience and a novelty for those who haven't flown the big bird often. If you must fly a leg on a 747, then use the data on this page to ensure you fly the newer version.

The seats on the A380 are roughly the same, although SeatGuru suggests 2k has slightly more pitch. The standouts on the 747 are the two front seats because the curvature of the nose means you can see forward of the plane out the window (we've omitted the A340 and 777 seat diagrams since they only contain the old version of the first-class product).

Recommended seat 2k has slightly greater pitch according to SeatGuru

Below you can see the unique 9th seat in the first row of the new configuration, whereas the old configuration has 2 seats in that row. While that 9th seat is somewhat unique, we still recommend 1A and 1K for privacy and because you can see somewhat forward.

Recommended seats are in the nose; more privacy and can see forward

As discussed, if you want to experience Thai first class, it's best to book a flight on an A380. That way, you're guaranteed the new version of the first-class product and a newer plane. If you must fly a 747, you can use the table above to ensure you get the newer 9-seat configuration. Just remember to secure a seat up the front in the nose.

Thai Airways only flies first class to/from Bangkok (BKK). The Thai lounge at BKK is one of the world's best, so for the best experience, especially if you only plan to fly first-class in one direction, we suggest booking a flight departing Bangkok.

There are three destination groups: Europe, Asia and Australia. The longest flights are to Europe, so they're our favourite if they're also serviced by an A380.

Overall, our favourite route is BKK-CDG for the following reasons:

Keep in mind equipment changes can happen, so the data above is only indicative. Thai is also planning to use an A380 to/from London later this year, so stay tuned.

At Flightfox, we help thousands of customers travel better for less every year. We do this with our marketplace of genuine travel experts. These experts have an extraordinarily deep understanding of flights, hotels and loyalty programs.

We haven't just flown Thai Airways First Class, but also helped many customers do the same. If you'd also like to fly the best route in the newest cabin for the lowest price, don't leave it to chance, work with us.

We just refueled the jet (updated the system). Please click here to refresh and continue.