When offered the opportunity to meet up with everyone in the team face-to-face for the first time since I joined Flightfox earlier this year, I was able to experience the pleasures of the journey itself, firsthand. In first class.

While I agree with the maxim that 'it's not the destination, but the journey, that matters,' I'd never applied it to my transportation choices while traveling the world. I'd rather spend as little money as possible in exchange for putting up with long or inconvenient travel times in cramped quarters, if it means that I'll have more funds to spend on 'being there' after my arrival. But how could I say no when I was offered the chance to experience first class at a fraction of its normal cost?

Time to Roll Out the Red Carpet

We launched a contest with an attractive Finder's Fee of $150, and asked our Flightfox Experts to fly me from Buenos Aires to Montreal (or nearby) and back on at least one six hour or longer first class flight, without breaking the bank.

Getting from South America to anywhere cheaply (including domestic flights) is no easy feat: budget airlines don't exist outside of Brazil and flight "deals" are rare finds, due to tight government regulation and lack of competition between airlines. Not to mention that first class flights in any part of the world typically start at prices at least five times that of economy.

By contest close, three experts had offered a total of four highly creative itinerary options that all included a first class segment, ranging from a price-defying, country-hopping $1,837 by Tony A. to a $2,452 trip by RDX that included 2 day stays in both Miami and Cancún on the way up. The winning itinerary was submitted by Paul44 for $2,325 and included a first class direct flight on Lufthansa from Buenos Aires to Frankfurt as well as a second leg also in first class from Frankfurt to Toronto. From there a bus could be taken to Montreal.

On the return trip, I'd take a much less luxurious but happily direct flight back in economy on United from Newark to Buenos Aires, which gave me the opportunity to make a pit stop in New York City, after taking a train from Montreal.

Arriving at the Airport

Check-in at the Ezeiza airport was simple and fast. I entered the first class line and after a wait of less than one minute, I stood on a plush red carpet and let my eyes wander to and rest on a single red rose on the counter while my ticket printed.

After passing through security, I was directed to the Star Alliance VIP lounge, just up a short set of stairs and down a hallway. Upon entering I was met with an atmosphere part "casual museum", with various rope and clay abstract art pieces hanging from ceilings and over a long, wooden central table, and part "modern library": roomy, with plenty of blonde wood and beige-colored leather and suede chairs scattered around the space.

A buffet with fresh pasta, sauces, salad ingredients, cheeses and olives was set up, as well as coffee and espresso machines, teas, sweets, sodas, wine, liquors and a mini-fridge of beers. The staff was attentive but discreet - minutes after I'd emptied my tea cup, it was politely and efficiently spirited it away. 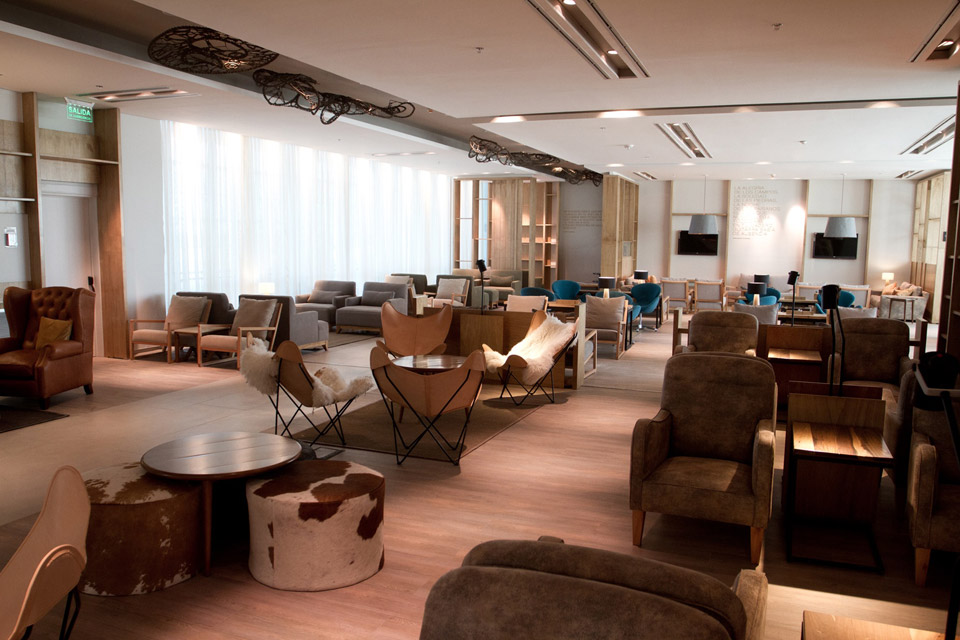 I and one other passenger in the lounge were destined for Lufthansa's first class non-stop flight from Buenos Aires to Frankfurt, which is not the most expensive Lufthansa first class flight but it is one of the longest, coming in at 13 hours when crossing the Atlantic from South America. We were escorted from the lounge down to the gate, where the rest of the passengers waited patiently in queue. I was made to wait perhaps one minute to ensure that all was ready, before I was swept through the gate and escorted right to the plane door. Flight attendants with ready smiles waited to usher me up a narrow flight of stairs to the spacious first class cabin on the top floor.

Upon entering the cabin, I immediately noticed the width of the aisles, easily able to accommodate two people passing. More than enough space in which to do a bit of yoga, I thought to myself. My seat was wide and firm with a not unpleasant nubbly texture, ample leather armrests, and had an adjustable reading light attached. A 21" or so tv screen was positioned in front of me on a half wall a good bit further than the farthest I could stretch my toes while sitting (and I'm fairly tall.)

The seat reclined quite far and I would have been happy to have had just it, but lo and behold, there was a real bed alongside, complete with white sheets, a down comforter, and a fluffy pillow. I was somewhat overwhelmed by the constant personal attention on the part of the flight attendants but decided to relax and enjoy it as much as possible. Various international newspapers and magazines were offered and champagne, salted macadamia nuts and bubbly water were next to me in the blink of an eye. 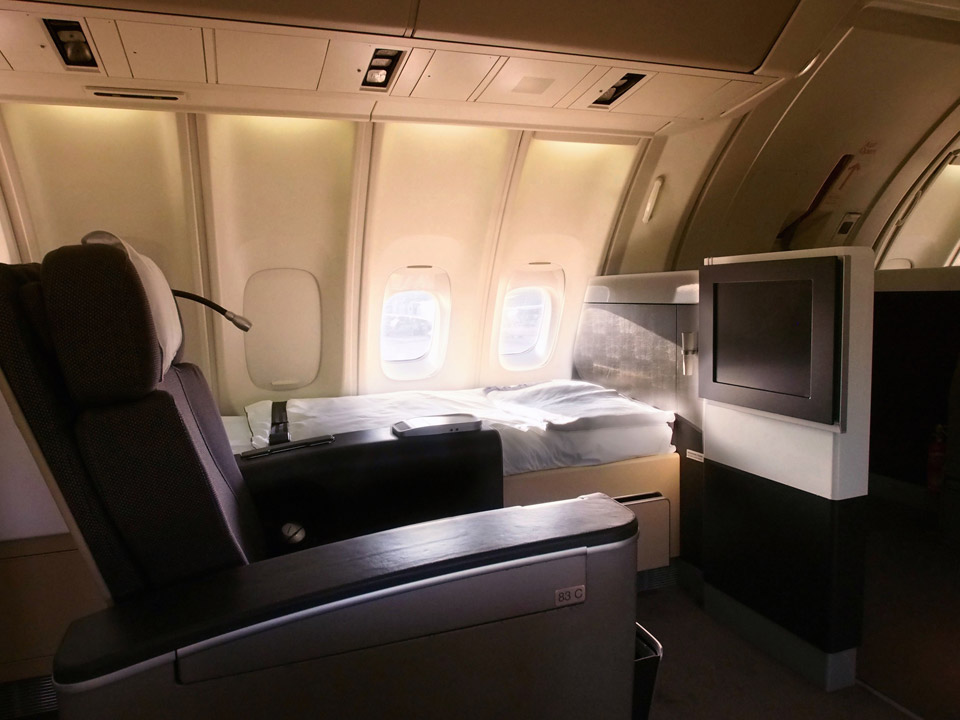 Before too long, a crab cake (...on a frosted glass plate accompanied by a metal fork - amazing!) appeared to my left and a crisp glass of riesling to my right. Out came the fold-out tray on which were placed olive oil, butter, bread, salt, and pepper. Humble enough beginnings, but then... Black caviar alongside chopped onions, chopped boiled egg and cream showed up soon after, followed by shrimp with pesto, a stuffed eggplant roll, and sliced rare beef. And next, a mixed greens salad with mozzarella, artichoke and asparagus arrived.

By this point I was already full but I braved the next course: sweet potato agnolotti with bitter greens and almonds. When the time came for dessert I requested a half hour respite to digest and enjoy my Austrian merlot. Which was fine, as first class service is "when you want it" (i.e. you can choose to eat whatever meal you desire at the time you desire. If you want breakfast at 3am, you'll get it.) Right on time, a plate of assorted cheeses and grapes showed up, followed by another of dark, milk and white chocolates. 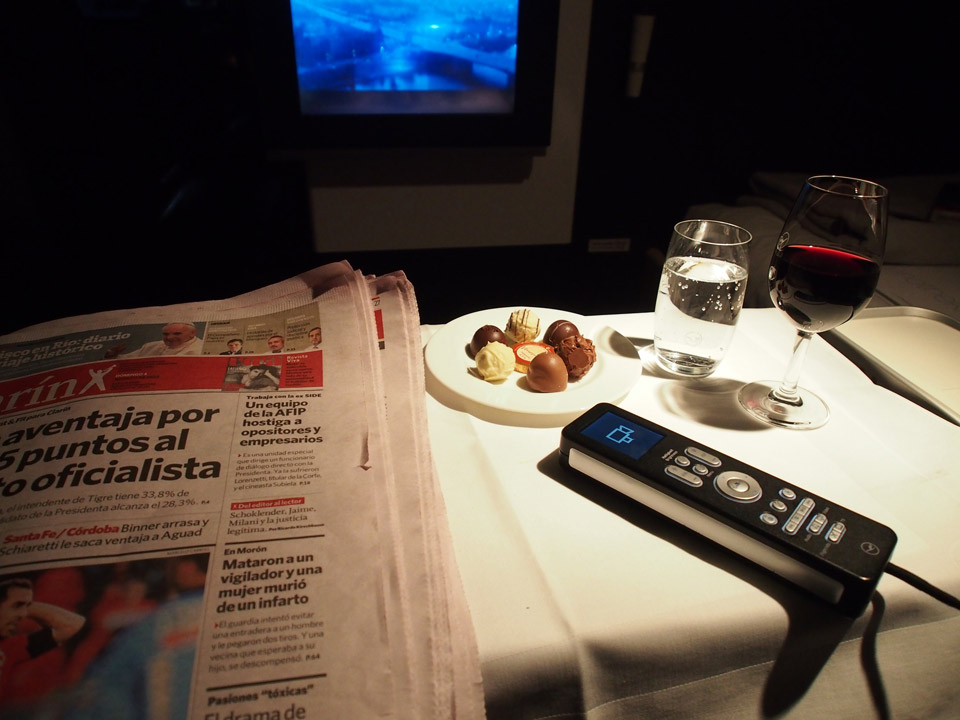 With a full belly, I reached for the Bose noise-blocking headphones that were tucked into a side compartment of my seat. They were unfortunately firmly attached to the cabin so my initial delight at a temporary upgrade to my sad little iPod earbuds was quickly dampened. However, the movie selection was more than adequate and worth the 90% reduction in airplane noise that comfortingly descended upon my ears. So much so that I really didn't want to take them off to go to sleep. I had no problem, however, with sleeping - as soon as I'd slid under the comforter, stretched out in my bed and tucked the pillow under my head, I didn't stir once until my requested "breakfast call" came in the form of a cup of steaming coffee.

My 13 hour flight sped by, hastened by gustatory delights and smoothed by the ability to sit and sleep comfortably. I admit I was a bit disappointed when the time came to exit the aircraft.

For a short time, at least, the journey had been what really mattered.